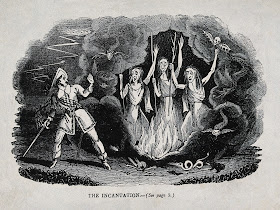 This adventure is suitable for delvers with at least 30 adds. Ranged weapons can only be used in the first round of combat - it then turns to melee. No magic.

It has been three days since Vinnie hired you to take care of his witch problem. He spotted you glugging Dwarfmeister grog down the Pig and Muck in Gull and approached you about a job. Vinnie owns a farm out west and has lately been having witch troubles. First it was one, casting a spell here and there, then two showed up and now he's got a whole coven of the bloody things creeping around his land making newt-based mischief. It all came to a head when the buggers turned all his horses into adders and his poor wife got bit on the ankle. He asked you to take care of the coven.

You arrive at the farmstead as evening draws in. You scan the fields but see no sign of witches dancing widdershins and what have you. From your vantage point you see two possible places they could be:

The ominous hoot of a lone owl sounds above you as you trudge through the murky wood. The very trees look like they would rough you up and take your wallet. Soon you come to a small hovel, sole spiralling from the chimney. Seems witchy enough.

You head over to a craggy outcrop where the mouth of a cave waits, gaping at you. Lighting a torch, you enter cautiously, walking into the stone belly of the beast. Make a L2SR-LK. If you succeed, go to 6. If not, go to 7.

Mustering your courage you tell a battle cry and smash down the door. The hovel is a single room littered with all sorts of odds and ends. Petrified toads, a jar of something particularly evil and monkey's paw. However there's nobody around. You suddenly hear a noise coming from underneath an upturned glass. You see a tiny person trapped beneath it, hammering on the sides with their little fists. It's a boy, no older than nine.

You know full well that witches love the smell of delicious bacon. They can't get enough of it. You pull a few rashers out of you bag and waft them in the air. Unfortunately, you forgot that other things love bacon too, like the wendigo standing right behind you. The creature leers at you with its antlers and deformed monstrous face before charging. You must fight it. It is MR 32 (4d+16). If you survive you end up splattering its head all over the side of the hovel.

You manage to quickly dodge the razor sharp spear that was heading towards your face. Looking back, you see a large humanoid mole with a scorpion tale. Mithids! You should have known. Two more appear out of the shadows. You just fight them. They have a combined MR of 56 (6d+28). If you reduce them to 20 con, the remaining ones will flee. If you survive, turn to 11.

You feel a spear pierce your back and you fall to your knees. Behind you three large humanoid moles appear with scorpion tails. Take 2d6 con damage. Within moments you are strung upside down over a roaring fire, the creatures flailing and chanting beneath. The day isn't going great, let's be honest. You feel yourself lowering and the heat getting intense.

You lift the glass and the boy lets out a tiny cheer. "I am Roy," he says, as if on helium, "My father is the farmer here. You must make a potion to turn me back. I know the ingredients for the one that shrunk me, but I don't know the remedy. I'm sure you can figure it out though. The original potion was: a vole, a cockroach and a sparrow." You look at the ingredients to hand.

You don't have time to speak to a small child in a glass. Instead you start rooting through the stuff in the hovel. Make a L1SR-LK. If you succeed, turn to 16. If you fail, turn to 17.

Night has fallen quickly and darkness is all around you. You get the sense you're being watched. Out of the darkness you can make out several shapes. Four crones wearing tattered black dresses reach out to you with pale, withered hands. The witches have found you. It's time to fight. They have a combined MR of 60 (7+30) and if they roll three sixes you are momentarily petrified, losing half your adds for that combat round. If you defeat them, turn to 18.

You tear one of the Mithid's tails off and ram it into its face before dispatching another. The remaining ones flee, squealing into the night. Exploring the cave further you find the remains of several delvers. One is carrying a glittering sword (3d+3). Another wears a Ring of Frost Fist. This conjures a giant fist made of ice once per day that acts as a 9d weapon. You loot the bodies and leave the cave. Turn to 10.

You kick your legs frantically, trying to loosen the rope. You can feel it slacken, so you continue. At last! Your feet are free, but you are plummeting towards the fire. You are at once engulfed in flame, never to emerge from the cave again.

You use your body to swing away from the cloying smoke and burning fire. The Mithids shriek, watching you try to escape. One throws a spear, missing you and catching the rope sending you tumbling onto the ground. You quickly get to your feet and flee out of the cave, spears whizzing by your head. Soon you are in the dark field, far beyond the evil cave. Turn to 10.

You throw the disgusting ingredients into the bubbling cauldron and make a viscous stew. Grabbing a ladle, you scoop out the brown mixture and feed it to the boy. The a pop Roy becomes normal size again. "Thanks for your help. But those witches are still out there," he says. You nod and tell him to run on home - you'll take care of the witches. Turn to 10.

You concoct a grotesque green mixture in the bubbling cauldron and feed it to Roy. He begins to grow and doesn't stop. His skin becomes blackened and scaly and his mouth stretches into a maw riddled with ivory teeth. The roof of the hovel bursts open as the Nightshade Dragon opens its wings. You must fight it. It has MR 68 (7d+34). If you defeat it you leave into the night. Turn to 10.

Under a pile of clothes you discover a pair of purple tinted glasses. Wearing them allows you to see what someone is really thinking in a situation. You chuckle and leave the hovel. Turn to 10.

As you rummage you accidentally knock over a vial of liquid. It shatters on the ground releasing a noxious gas. You find yourself changing physically. You are now a golem. Your attribute modifiers are as follows: ST x1.75, DX x0.75, INT x 0.5, CHA x 0.5, LK x 1, SP x 1, WIZ x 0.5. Seeing yourself in the mirror you let out a shriek and flee the hovel. Turn to 10.

You leave the pile of witch corpses in the woods and rest up in the farmstead. The next day you are woken by Vinnie, who thanks you for ridding his farm of the witches. If Roy is alive, he pays you 400gp. If he isn't he pays you 200gp.