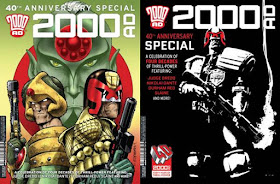 2000 AD is one of the most influential and important comic books of all time. Not only did it give birth to such iconic characters like Rogue Trooper, Halo Jones and, of course, the law himself Judge Dredd, it became the crucible that produced some of the best writers and artists in the business.

This week 2000 AD celebrates its 40th birthday with a special anniversary issue. First published in February 1977, 2000 AD is a unique British success story – one of the most influential comic books of all time. Millions of youngsters have grown up on its diet of science-fiction action, punk-inspired irreverence, subversive comedy, ultra violence, and disturbingly prescient dark satire.

Giving some of the biggest names in the industry their first break, including Alan Moore, Brian Bolland, Dave Gibbons, Grant Morrison, Mark Millar, and Simon Bisley, these talents have gone on to not only forge geekdom in their own image, from DC Comics’ influential Vertigo imprint and the current storytelling revolution at Image Comics to Marvel’s billion-dollar movie franchise.

The comic has meant a lot to me personally for a long time now and I want to thank all the creators, editors and all involved for making such an amazing experience every week of the year.

So here's to another 40 years.