Piss up in a brewery - a little T&T adventure 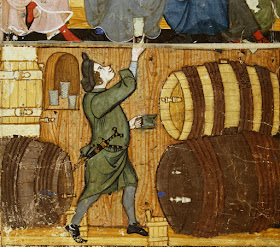 This short Tunnels and Trolls adventure is suitable for Delvers with no more than 30 personal adds.

Fornigan's Pale - the gold standard of ales on the Dragon Continent. Nothing else comes close, though Fornigan's recipe has always remained a tightly guarded secret that only himself and his dwarf business party Grummp know. The brewery stands in the middle of nowhere, with high stone walls to prevent urook raids and private guards posted along the wall as lookout.

Rumour has it that Fornigan is set to unveil a brand new ale - the likes of which have never been seen before. Unfortunately he seems to have disappeared and Grummp is nowhere to be found either. The PCs have been hired to investigate the disappearances.

Fornigan is dead. The new hope he imported from the Blasted Land were actually hatchlings of a creature called the Skrith - a large, deadly mantis the size of a goblin. Once the fermentation process began, the eggs hatched and the Skrith began their killing spree. Grummp is currently holes up eating rats and pretty much anything he can get his hands on. But now some of the Skrith are mutating - becoming larger and more vicious. Of course, without shipments of this amazing brew, the surrounding cities are becoming restless.

The 100ft stone walls are silent. A L1-SR on IQ reveals there should be at least four guards on patrol at this time. A thick iron gate is open, leading to the entrance.

A wide, marble room with a semicircular reception desk. A statue of Fornigan stands in the middle holding a beer aloft. His other arm has broken off. Closer inspection reveals deep gouges in the stone created from the Skrith claws. A door leads to the mill room.

There is a distinct malty smell here. Three green orbs are stuck to the ceiling. These are eggs, which will hatch when the PCs enter reveling three Skrith larvae (MR8, 1/screech - emits a high-pitched screech alerting others of an intruder). If any have the chance to use it's screech ability, the Skrith Stalker from the fermentation room comes barrelling in from the north door.

Two guard bodies are here, their bodies half eaten and faces deformed. A L2-SR IQ reveals it was acid that caused this. Each guard has a shortsword and helmet.

Three large copper silos fill the room. A scream echoed out as the PCs see a hulking Skrith Stalker (MR 40, 2/Acid Spit - fires 40ft, doing 3 Con damage. L1-SR on DX negates) dangling a brewery worker over its clacking maw. Another watches as if amused. A body with no head lies on the ground.

An eastern door leads to a small office. Papers on the desk indicate a recent shipment of hops from the Blasted Lands. A golden tankard with Fornigan's name engraved on it sits here, worth 300gp.

Hundreds of wooden barrels are stacked around this room. A two-headed Skrith with blades for arms screams and charges at the PCs. MR54, 3/ Decapitation - Slices a head clean off. L1-SR on DX or LK negates. It's blades can be used as 4d6 melee weapons with a STR 16 requirenent.

Whimpering comes from one of the barrels. It's Grummp crying his eyes out. He explains what has happened and that his partner was eaten by one of the creatures. He warns that they are mutating into even more terrible things.

When the PCs try to escape they are blocked by a 15ft five-headed Skrith Emperor (MR70, 3/Acid Bath - 1d6 targets are bathed in acid, taking 6d6 Con damage. L3-SR on DX or LK halves damage. If they escape and Grummp survives, he gives them 500gp for saving him. The city mayor gives 2000gp for investigatoin.