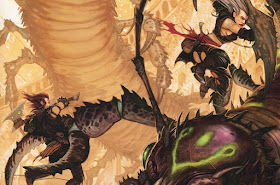 I'm back in the GM seat after about a year, about to kick off a new Pathfinder campaign based on Arabian fantasy. Unlike my previous long games, this one's designed to last around two months - so one concentrated adventure with PCs beginning at level six.

Bal Jala is, of course, the jewel of the Sumerland. A ridiculously lavish and architecturally brilliant city of white stone and golden minarets sitting beneath an azure sky and by the river Kish. Because I'm cribbing heavily from Al-Qadim, the streets are awash with all kinds of races (no dwarves though - too hot). Elves, orcs, goblins and humans, among others, live and work side-by-side in relative harmony. The city is governed by the Sultan Harun, a recent instatement as far as sultans go after the passing of his father Abir seven years ago. Harun, a wiry middle-aged man with a kind demeanour and a relaxed style of ruling, has proven popular among the majority of Bal Jalans for his progressive taxation laws and re-opening of spice trade routes with the Ivory City to the north. The last day of Mihla has even come to be known as Yawm Harun, or Harun’s Day.

Of course, not all in the sultanate support Harun’s methods. Rebel groups have cropped up in and around the city - most of whom are disorganised thugs who like to cause problems for the Sultan’s Wasi, the city guard. However there have been signs that some are becoming a more organised menace following the murders of two prominent nobles - an elf and an orc. Harun has ordered further investigations into these and similar crimes, discovering the organisation’s name: The Black Viper.

Harun is advised by his most trusted Vizier Shar, who was his father’s right-hand man in the past. Shar isn’t one to be meddled with, being a shrewd politician from a line of great scholars. He is, however, a supporter of Harun and lover of his city, even going so far as disguising himself as a common peasant to mingle with the people in the marketplace, embracing the experience of ordinary folk.

So that's an intro to Bal Jala and my new campaign. I'll be updating weekly to talk a bit about what's happened in that week's session.