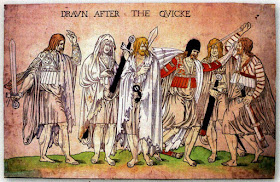 I wanted to create a short Quill hack for letter-writing adventures in an OD&D world.

Battle-hardened, tough and muscular. Fighters bring the pain on the field, but don't shy away from exposing their heart when writing.

Weavers of the great magical web. Scholars, geniuses and often loners. Magic users are eloquent, speaking with gravitas and confidence on many subjects.

It's not what the message looks like, but the words in it. Clerics put others before themselves and help those in need at all times.

From the great undermount, dwarves have an intricate way with words, though being used to scratching runes it can be difficult to understand their writing.

Elves boast the most beautiful script - flowing and organic. However they tend to be cold and logical, with others often perceiving their communications the wrong way.

Country bumpkins who enjoy the good life. They have no time for long letters, but they learnt their script from the elves, making their rare missives something to behold.

Special abilities (use once per scenario)